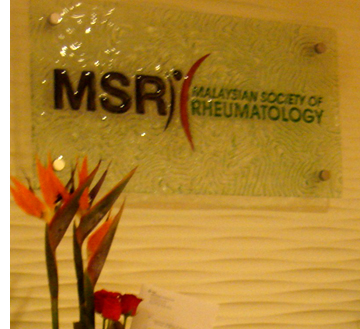 History of the Malaysian Society of Rheumatology

The Protem Committee of the Malaysian Society of Rheumatology (MSR) held its first informal meeting at the University Hospital on 2nd October 1987.

The first Protem Committee comprised a small group of doctors from various medical disciplines. Professor Florence Wang (then Head of the Department of Medicine at University Hospital) served as the first President, Professor Subramaniam (professor of Orthopaedics at University Hospital) the Vice-President, Dr. Kiran Veerapen (one of the four Rheumatologists in the committee) the Secretary and Dr. Chin Gek Liew, the Treasurer. The executive committee members were Tan Sri Dr Abu Bakar Suleiman (then Director-General of Health), Dr. Abdul Shukor, Dr. Ho Kok Kheong and Dr. K. Maheendran.

The MSR inaugural meeting was held on 9th January 1989 during which, a scientific session was held and thereafter, the society with its Protem Committee was formally introduced to the founder members by Professor Florence Wang.

The Malaysian Society of Rheumatology was registered with the Registrar of Societies on 7th August 1989, following which the Protem Committee was dissolved and a new official executive committee was elected. MSR soon gained recognition and was warmly welcomed by regional Rheumatology bodies, namely, the Rheumatology Association of ASEAN (RAA) and the Asia Pacific League of Associations for Rheumatology (APLAR). MSR began to actively participate in the activities of these organisations.

During the early years, we were indebted to many of our rheumatology friends from around the world who came to Malaysia to help MSR carry out its teaching programmes. As our numbers were small, MSR actively ran rheumatology workshops throughout Malaysia for interested general practitioners and physicians, so that non-inflammatory rheumatic disorders could be treated by the generalists and inflammatory disorders be appropriately referred to rheumatologists.

In particular, we owe our thanks to Professor Paul Dieppe from the United Kingdom and Professor John Edmonds from Australia, both of whom have been and still are influential in the development of rheumatology in Malaysia. In 2004, Professor Paul Dieppe, the original author of the GALS (Gait Arms Legs Spine) teaching video, revised it by using Asian patients as subjects as it was intended to be used for the Asia Pacific region.

We are grateful to many other foreign rheumatologists who came and freely shared their experiences and helped rheumatology in Malaysia to grow. We are especially grateful to Dr. Kiran Veerapen (MSR Past President) whose tireless contribution in the first decade of the formation of MSR , together with her vision and dedication have nurtured this society into what it is today.

In 1998, MSR and SSIAR (Singapore Society of Immunology, Allergy and Rheumatology) came to an agreement to merge their annual meetings to form what is known as the “Workshops in Rheumatology”. These meetings have been held annually since and are hosted by either society on alternate years. The first “Workshops” was held in Pulau Langkawi in 1998. Since then, Singapore has hosted the “Workshops” in 1999, 2001, 2005 and 2009, while Malaysia hosted the “Workshops” in Penang in 2000 and 2004, Kuala Lumpur in 2002 and Petaling Jaya in 2008 and more recently in 2010. This merger has resulted in greater cooperation between these 2 small societies and more importantly, also provided a link for the training of rheumatology trainees from Malaysia at Tan Tock Seng Hospital, Singapore and Singapore General Hospital.

Rheumatology in Malaysia has indeed grown over the years. This steady growth coupled with the increased confidence and maturity of its members, have allowed the birth of a new entity in the Arthritis Foundation of Malaysia (AFM) in 1994 – a patient-oriented foundation which complements the rheumatology service for patients in Malaysia.
In recognition of its developing role in this region, the MSR was given the honour to host several international meetings which include:

The Penang International Teaching Course in Rheumatology, November 1990, in collaboration with the Penang Medical Practitioners’ Society

The 12th APLAR Congress of Rheumatology, August 2006, Kuala Lumpur (which attracted more than 2000 participants during this biennial event in Malaysia)